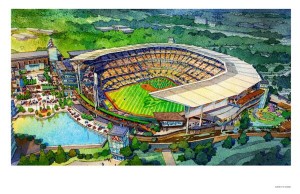 In May, the Cobb County Board of Commissioners approved the GMP (guaranteed maximum price) for construction of the new Atlanta Braves stadium at $462.2 million. Cobb Chairman Tim Lee said that this price was “where we expected it to be,” which is far less than the original estimate of $482 million. The 5-0 vote approving the GMP was a procedural step required as part of the contracts between the Braves, American Builders 2017 (the joint venture of four construction firms hired to manage the project), and the county.

How is this project being funded?

Because of the way the construction agreement and the development agreement are written, the county had to approve the final guaranteed maximum price. No matter how the GMP had come in, Cobb County’s contribution was capped at $300 million, which the county plans to pay through the issuance of approximately $368 million (with a commitment not to exceed $397 million) in bonds by the Cobb-Marietta Coliseum & Exhibit Hall Authority. Any bond revenue above the $368 million will be spent on the cost to issue the bonds and capitalized interest.

The Braves have agreed to cover the rest of the cost to build the stadium.

The Braves franchise has agreed to pay the county $6.1 million annually for the next 30 years in debt service on the bonds, which will cover $92 million of the $368 million principal costs. The remaining $91 million from the Braves contribution will go toward interest on the debt.

This leaves the county to cover $276 million in debt service on the bonds, according to Jim Pehrson, the county’s finance director. This amount — combined with $14 million in planned transportation improvements and $10 million from the Cumberland Community Improvement District — represents the $300 million cap in public money.

While the Braves are responsible for routine maintenance of the stadium, the county has agreed to pay $35 million in capital maintenance on the stadium over the next 30 years, which Pehrson said would be funded from the county’s regular annual budget. The maintenance costs are outside of the $300 million cap.

Lee said in the meeting the $300 million to fund the stadium’s construction, the $35 million in capital maintenance and the cost to build the bridge are the county’s total contribution to the whole of the stadium project.

The current completion date for the ballpark is 24 January, 2017, well ahead of first pitch of the 2017 season, which is likely to begin at the end of March or beginning of April 2017.

Board approves the ‘Guaranteed Maximum Price’ of Suntrust Park: Cost to build set at $462.2 million (Wednesday, 27 May 2015, The Marietta Journal)

Cobb officials to vote on price it will pay for Braves’ stadium (Friday, 22 May 2015, Atlanta Business Chronicle)

Against the Atlanta Braves’ New Stadium Plan? Too Bad (Wednesday, 28 May 2014, Boston.com)