In October 2015, a New Mexico jury found Tri-State Generation and Transmission partly responsible for the largest wildfire in the state’s history. The wholesale power supplier accepted the verdict but the coop community at large breathed a sigh of relief at the jury’s rejection of the idea that Tri-State had operated as a joint venture with Jemez Mountains Electric Coop, the local coop that was found largely responsible for the damage.

In June 2011, a devastating wildfire swept through New Mexico’s Santa Fe National Forest, blackening over 156,000 acres, destroying 63 homes and causing an estimated $200 million worth of damage. The fire was sparked when an 80-foot-tall “visibly diseased and dying aspen tree,” located on private property about 50 feet beyond the utility easement, fell onto the easement, landing on lines owned and maintained by JMEC, the largest coop in New Mexico.

The 300 plaintiffs in the case had claimed that JMEC and Tri-State operated as a joint venture or enterprise, which is why Tri-State was included in the original complaint. Tri-State is owned by the 44 electric cooperatives that it serves, including JMEC, and the plaintiffs believed that since the coops have a 50-year agreement committing them to buy their power from Tri-State, Tri-State and JMEC are “basically one and the same.”

Attorneys for Tri-State emphasized the difference between the two entities, stressing that they were not involved in a joint venture but rather JMEC was simply one of the member coops to which Tri-State delivers power. Tri-State attorneys showed that the transmission company met federal requirements for maintaining its lines that delivered power to the Jemez substation. After that, they said, it was not Tri-State’s responsibility to maintain the lines operated by the electric cooperative. Tri-State did side with JMEC that the coop was not negligent and followed distribution cooperative industry standards and practices for line clearance and tree trimming. 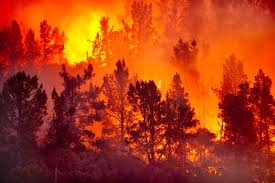 The National Rural Electric Cooperative Association (NRECA) and other national cooperative organizations followed the case closely, particularly as it concerned the joint venture issue, and filed briefs outlining their concerns.

After a five-week civil trial and a six-hour deliberation, the Sandoval County jury found the coop 75 percent negligent for the fire. Tri-State was found 20 percent negligent and the Forest Service was found responsible for the remainder. The jury verdict supported the cooperatives’ arguments that JMEC and Tri-State did not operate as a joint venture or joint enterprise, noting the two businesses operated as independent businesses and naming them separately in the verdict.  The jury verdict thus upheld the traditional cooperative business model between coops and their generation and transmission providers.