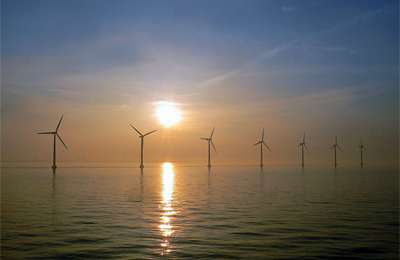 Georgia’s 42 electric membership cooperatives (EMCs) provide power to nearly half the state’s 9.4 million residents and more than 70 percent of its land area. Despite the pressures of keeping up with escalating population growth (Georgia is the fifth fastest-growing state in the nation), the EMCs continue to maintain electricity rates below the national average. They also have pursued renewable energy resources, using biomass, solar and water to generate electricity. Yet while wind as a resource has been gaining momentum in other parts of the U.S., in Georgia (and the Southeast) it has a history of starts and stalls with little progress over the past decade.

Winds are categorized in classes, ranging from one (low) to seven (high), with seven possessing the greatest wind speed and wind density. Class 3 winds are considered to be the minimum required for effective wind power generation. The U.S. Department of Energy’s National Renewable Energy Laboratory publishes a Wind Resource Map that details the various levels of potential wind energy available around the country. According to this data, most of the eastern half of the United States, with the exception of coastal and a few mountainous areas, are unsuitable for wind power.

Although most of Georgia’s topography is not conducive for wind power, certain areas in the north Georgia mountains produce higher winds that can power turbines. In 2010, Towns County Schools in Hiawassee became the first Georgia public school to install a turbine on campus, funded through an open partnership among Towns County Schools, Blue Ridge Mountain Electric Membership Cooperative (BRMEMC), and the Georgia Wind Working Group (GWWG). The project served as a teaching opportunity for students but also hoped to promote to regional policy-makers the wide array of renewable energy applications for the northern Georgia region. The Towns County turbine is still in operation, but to this date no other schools have installed the technology, despite available funding from Wind for Schools project, a U.S. Department of Energy program that helps develop a future wind energy workforce by engaging students at higher education institutions and serving as project consultants for small wind turbine installations at rural elementary and secondary schools.

A 2007 joint study by Southern Company and Georgia Institute of Technology, “Southern Winds,” found average wind speeds of 16-17 mph about five miles off the Georgia coast, which are considered Class 4. Class 4 winds have been used in other areas of the country for land-based wind farms but offshore wind resources typically must be stronger to overcome higher construction and operational costs. Despite the higher costs and some existing regulatory challenges, Southern Company decided to continue to pursue wind as a green energy option, anticipating that as technology advanced in that area, costs would come down.

In 2007, Southern Company and Georgia Power submitted an application to deploy a site-specific wind data collection configuration off the coast of Tybee Island, Georgia. A lease was signed that year at Skidaway Institute of Oceanography to host 4 small turbines and a meteorological tower for 2 years, but it wasn’t until February 2016 that the met tower was erected. There are no announced plans as to when the turbines will be installed.

In February 2012, the Tybee Island City Council adopted a local resolution to support wind energy development, and proposed to erect coastal Georgia’s first wind turbine at its water treatment facility to help power the facility. The city had been a very prominent supporter of the wind initiative, and had co-hosted multiple events on the topic over the past several years, including conferences sponsored by the Georgia Wind Working Group (GWWG),  the U.S. Department of Energy’s Wind Powering America, the Southern Alliance for Clean Energy and the Federal Bureau of Ocean Energy Management. Tybee looked to use wind power to reduce its carbon emissions, but a study had shown that, after 5 years, the city’s savings on electricity would only add an extra $28,000 to its annual operating budget.

in 2014, the Tybee City Council pulled the proposal off its agenda. The council did not shelve the idea, and instead recommended that the city evaluate other potential sites for a turbine or wind farm. The Southern Company, Georgia Power and state EMCs were also still supportive of a coastal turbine installation, viewing the Tybee turbine as a possible pioneer in southeast coastal wind power.  The utilities wanted to show how one small turbine in a sensitive area could reduce greenhouse emissions with little negative impact on wildlife, and the gathered data could be used to support other coastal installations.

Although much advancement in wind energy technology has been made in recent years, power generated by offshore wind farms continues to have higher costs when compared to other renewable resources. Wind energy is dependent on weather patterns that may be too inconsistent for large-scale use in the southeast. Offshore wind must also contend with major meteorological events such as hurricanes that sometimes affect the Atlantic coast. Finally, although wind energy does much to reduce the carbon imprint, consumers still express concern in regards to noise pollution and the potential negative impact on wildlife.

In a 2016 study, the U.S. Department of Energy predicted that in a few years, wind turbines up to 450 feet tall could make locally-generated wind power economical for nine southeastern states, including Georgia. Citing this study, Georgia Power wants to investigate the potential for the super-sized wind turbines in multiple locations in the state for at least two years. In the meantime, Georgia Power seeks to leverage onshore wind energy resources outside of the southeast. The utility is purchasing 250 MW of wind energy, enough to power 50,000 homes, through 20-year Power Purchase Agreements; beginning in 2016, 151 MW will be delivered from Blue Canyon II and 99 MW from Blue Canyon VI wind farms in Southwest Oklahoma.

While Georgia has yet to develop a wind farm, the state is already benefiting from wind farms across the country in regards to employment opportunities. The Peach State is currently home to over 20 wind energy component manufacturing facilities serving the domestic and international wind industry markets. In 2013, there were between 101 and 500 direct and indirect jobs provided by the wind industry in Georgia. In addition, the Port of Savannah’s Ocean Terminal is an important transportation hub for wind energy equipment.

The future potential for wind turbines in Georgia or a few miles off its coast still exists. Georgia Public Service Commissioner Tim Echols stated in 2014, “The question we’re asking about wind is will it work in Georgia?… I think there are opportunities…I think there’s still data that we have to have in order to move forward, and that’s just smart. It’s better to measure twice and cut once, and that’s exactly what we’re doing with wind powers.”

Updated 02.27.2017 –  The nation’s first offshore wind farm launched off the coast of Rhode Island in December 2016, spurring Environment Georgia to call for the state to renew research into wind power in Georgia. Read this article from Saporta Report for an update. http://bit.ly/2l1FIba