Two Savannah homeowners filed a complaint against a local air conditioning contractor and its insurer, asserting claims of professional negligence and fraud. The couple alleged that in March 2009, the contractor replaced the duct system of their home’s air conditioning unit. The following June, the couple discovered mold growth on the vent covers. They hired an independent contractor who upon inspection concluded that the duct system, which contained holes, gaps, loose connections and insufficient mastic, had been defectively installed in violation of the applicable city ordinances, resulting in excessive moisture and mold contamination throughout the residence. The homeowners alleged that they grew ill with respiratory problems as a result and were subsequently forced to vacate the residence and abandon their personal belongings. Their complaint sought to recover repair costs, moving costs, expenses associated with rental property, costs of living, costs related to the replacement of personal property, medical expenses, punitive damages, attorney’s fees, and costs of litigation. 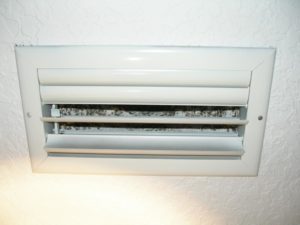 The homeowners’ personal injury claims consisted of both health problems and emotional distress arising from the alleged negligence. The homeowners also alleged that the company had committed fraud, asserting that it should have installed a rigid duct system instead of the flexible duct system that it installed.

The case was tried before a jury which returned a verdict in favor of the homeowners. The homeowners were awarded $1 million, including punitive damages, personal injury and additional living expenses incurred by having to leave their home for 77 months. The court found no evidence of fraud on the part of the contractor, nor did it find evidence that the contractor misrepresented to the homeowners that it would install a rigid, rather than flexible, duct system. The court did find the contractor had committed negligence.