From the September 2016 issue of Construction Dollars and Sense, Smith Adcock and Company monthly newsletter.

First covered in this newsletter, when the developer won in Tax Court in February 2014, on appeal by the IRS for the last 2 years, the builder / developer successfully defended its choice of the completed contract method (CCM) for reporting income for its planned communities.

Tax law allows the CCM for small contractors with average annual revenues under $10 million and for homebuilders. The percentage-of-completion method (PCM) is generally required for all others.  Developers, who build for their own account, or companies who build spec houses do not qualify for the construction specific methods.  The CCM defers the recognition of income until the contract is completed or is at least 95% completed and being used by the owner.

Shea Homes, Inc. built communities including the homes within the developments.  They used the home 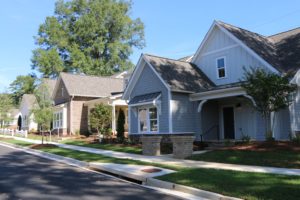 construction exception to the general rules of Code Section 460 and reported with the CCM. They treated the entire development as a single contract to defer hundreds of millions in profits until the development or phase reached 95% complete, at which time they included all the sold homes in taxable income for that year.  The IRS interpreted the Internal Revenue Code and Regulations to say that Shea was required to report the revenue and the costs of each individual home when it was sold to a homeowner.  Shea argued that the individual home did not constitute the entire subject matter of the contract, which also included the lifestyle and the amenities such as the golf courses, waterfalls, club houses, hiking trails, etc. Shea had contractual obligations to the homeowners to provide those additional benefits which extended past the footprint of the individual home.

The Appeals Court, on August 24, 2016 agreed with the Tax Court decision from two years ago that Shea’s individual home sales were not required to be reported when title for a single home sale passed to the homeowner unless the entire phase or development had reached the benchmark of the 95% rule.  The ruling is not broad enough to cover all developers and all builders who build multiple homes, but with the facts of Shea, a builder can rely on this case.  Another case on the same issue, but with substantially different facts, by the name of Hughes, lost in Tax Court, pursued their case to Appeals and lost there also during this same period of time.  In that case, the taxpayer developed communities but did not construct or sell any individual homes.

Regulations to Code Section 460 were issued as “proposed regulations” eight years ago and have not been issued as “final,” but after this case, it may be reasonable to anticipate the previously proposed regulations will be soon finalized.  With those rules in a form on which contractors can rely, not only homebuilders, developers of communities of homes, but also the infrastructure contractors of those projects may soon have guidance for their tax reporting.

The information herein is general in nature and should not be construed as advice or opinion of Smith, Adcock and Company LLP.

It should not be used as a substitute for competent advice which should be obtained from your Smith Adcock professional.